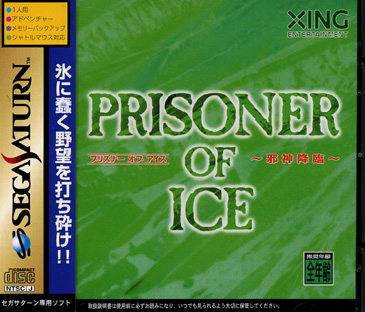 1937. Somewhere in the Antarctic... Out on the ice-floes, a handful of men are fleeing towards a submarine... Theyre carrying three crates whose contents seem particularly important. But theyve already been caught up by an airplane from the nearby Nazi base. The shower of metal that rains down on them from above leaves little chance of escape for the men... In the general panic, one of the crates falls and splits open... One of the men tries to close it again but a long tentacle emerges from inside the crate, wraps itself around him and tears him to shreds.

As a lieutenant in the U.S. army, Id been assigned as observer to a BRITISH submarine. We were submerged at the time, and Captain LLOYD was filling out his log... As his second-in-command had been killed by the mysterious contents of the third crate, he appointed me in his place. While we were discussing the mission we had just completed, DRISCOLL, the pilot, reported that his radar had just picked up a vessel. LLOYD gave the order to surface to identify the new arrival: It was a German cruiser... Its sonar had picked us up and it began dropping its depth charges. The Captain ordered the submarine to dive but one of the mines shook the HMS VICTORIA violently.

LLOYD asked me to accompany him and check that everything was normal. The scene that greeted us in the hold was not a comforting one: Seaman JONES was lying on the floor, writhing in agony. Before dying, he mumbled a warning about the crates. Indeed, the door to one of the two cabins was open, and its frame was surrounded by fire. LLOYD rushed forward to assess the extent of the damage. The explosion hadnt caused a leak, but the fire had to be put out at all cost. But even before he could intervene, he was snatched away by a tentacle that dragged him inside the cabin. I rushed to his rescue... Too late... I hurriedly closed the door, hoping it was strong enough to contain the creature.

Another game in Infogrames' line of H. P. Lovecraft inspired games started by Alone In the Dark, Prisoner of Ice puts you in the role of Lt. Ryan, an American agent stationed aboard the submarine H.M.S. Victoria on a rescue mission to the Antarctic. The Victoria picks up two mysterious crates during the course of the rescue. Before you know it the Captain is eaten alive by the cargo, a horrific monster with whom you are trapped aboard the submarine. And that's just the start of your problems.

Prisoner of Ice features a very simplified version of the classic adventure game interface, where you can left click with the cursor to operate an object or right click to look at it. The program won't let you do anything with these objects, other than the few appropriate actions needed to advance the game.